This is part 2, following my post Nova Scotia energy part 1: the present. 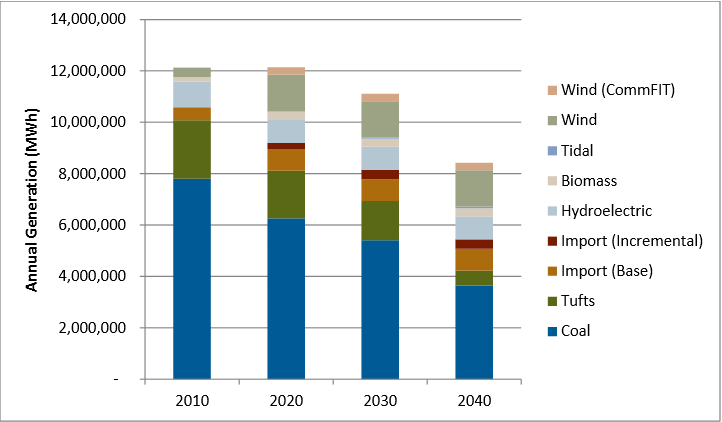 The above graph is taken from ICF's 2014 energy market report, and is their minimum growth forecast.  If correct, Nova Scotia will generate around half of it's power from coal for the next 25 years!  My prediction is that the future to 2020 is unlikely to be much better than ICF's forecast, however after 2020, cheap natural gas will start to play a bigger role in reducing power generation from coal.

ICF is forecasting increasing natural gas prices compared to what they were when the report was written.  Their 2015 forecast was for around $4/mmbu a the henry hub, yet it is currently trading below $3/mmbtu.  The report correctly states that the price paid for gas in the maritimes is tied to the price at the Dracut hub near Boston, MA.  Due to limited pipeline capacity from natural gas producers in PA, the price is higher than the henry hub, especially in winter when it regularly peaks over $20/mmbtu.  Heritage Gas is so convinced these winter price peaks will continue that it has entered into an agreement Alton Natural Gas Storage to build salt caverns to store gas for winter peak use.

Over the coming years, I expect these winter spikes to be significantly reduced, due to a number of factors.  The first is new pipeline construction.  The biggest is Kinder Morgan's Northeast Energy Direct pipeline which will bring over a billion cubic feet per day to the Boston area.  The Constitution pipeline will bring up to 0.65 bcf/d of gas north from Marcellus wells in northeastern PA.  A couple smaller projects will add around another .5 bcf/d of natural gas pipeline capacity to the Boston area.

The reason for these pipeline projects is not just because of unusually high prices in New England, but the combination of those high prices and unusually low prices in central Pennsylvania.  This winter while prices around Boston were peaking over $20/mmbtu, prices at the Leidy hub stayed below $3, and are currently averaging $1.50/mmbtu.  Pipeline builders could charge a tariff double the typical 50-75c/mmbtu and producers would gladly pay it in order to get their gas to markets.  Energy companies like Cabot Oil and Gas have halted completion on many of their natural gas wells while they wait for new pipeline capacity to be built.

Another reason I expect natural gas prices in NS to average lower in the coming years has to do with how events on the other side of the world affect LNG prices.  There are a number of LNG import facilities including Canaport that are able to provide extra gas supplies during the winter peak, but for the past few years they have imported very little.  The reason is unusually high LNG prices following the Fukushima disaster made it unprofitable to import LNG.  New production from LNG plants in Australia has cut LNG prices by more than half in the last year, with prices currently around $7/mmbtu.  Additional LNG production from projects under construction in Australia and the US should push LNG prices in the Atlantic down to the $5/mmbtu range  by 2020.

The combination of new pipelines and lower LNG prices should lead to Dracut natural gas prices below $6/mmbtu during the winter peak and around $3/mmbtu for the rest of the year.  This will eventually lead to lower natural gas prices in Nova Scotia, which will provide the financial incentive for switching more generation from coal to natural gas.  Lower natural gas prices should also mean Nova Scotia will use more power from Muskrat Falls when it is completed.  Nova Scotia Power has locked in about 1.2TWh/yr of power from the project, and will be able to purchase another TW or so at market prices.  Cheap natural gas in New England is pushing down electricity prices, so New England won't have to pay top dollar for power from Muskrat Falls.  This should lead to Nova Scotia to purchase much of the surplus power, and at rates that should be significantly lower than the power it has locked in on a 20 year contract.

Posted by Ralph Doncaster at 6:55 PM

The advantage of a ductless AC is that the fan and the condenser are located in the outdoor section. Keeping a room cool without the added distraction of loud noise is a noteworthy function.