A half a year after I wrote about Nova Scotia's energy past and future, Nova Scotia's Electricity Plan (PDF) was released.  While there are a couple promising tidbits in the plan, most of it is propaganda and pseudo-science.

The propaganda starts with the executive summary, with statements like, "By 2040, the province will have moved from among the most carbon-intense electricity generators in the country to a green powerhouse."  Firstly, market predictions 25 years in the future are likely to be as accurate as weather predictions 25 years in the future.  Secondly, becoming a "green powerhouse" is not a priority for Nova Scotians; things like health care, education, and jobs are what voters care about. 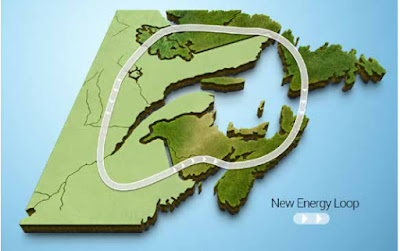 Page iv talks about interconnection with NL and NB, with the focus being importing power over the Maritime Link, some of which could then be re-sold to New England.  I've previously expressed my skepticism about the economic benefits to NS, and since then I've only found more evidence to solidify that position.  The Economic Analysis done by Natural Resources Canada is a wealth of information.  The cash flow analysis in section 5 shows an expected export price of C$72/MWh in 2017, and $86 in 2020.  I assert that the opportunity for Nova Scotia, in the next 5 years, to re-sell lower Churchill power to New England, is nil.  As I write this blog post on a mid-November day, the wholesale price of power published by ISO new england is US$17/MWh (C$23/MWh), and New Brunswick is selling power to New England for approximately the same price.

These low power rates are not a fluke; from watching ISO-ne and PJM over the past year, I've seen prices averaging around $25/MWh.  ISO-ne recently announced that power prices in 2015 were the lowest since 2003, and more natural gas power plants continue to be built in and around Pennsylvania.  Appalachian natural gas prices continue to be depressed due to supply exceeding pipeline capacity, even as projects like the REX reversal ramp up.  Companies like Cabot Oil and Gas have cash operating cost as low as 10c/MMTU, reserves are huge, so cheap natural gas will continue for the foreseeable future.

One positive thing in the plan is better interconnection with NB, in particular the "Joint Dispatch Pilot" discussed on page 16.  The plan mentioned it is intended for balancing demand, but I think it should be expanded for large wholesale power purchases from NB.  The upgraded interconnection infrastructure should be a lot less expensive than the maritime link, and the cost of power would be significantly less than from the lower Churchill.

I'll finish by pointing out some of the climate change fear-mongering in the plan on page 19: ""We are experiencing more floods and more dry spells, and more frequent extreme weather events, which are compounded by rising sea levels."  I could find no research confirming rising sea levels in NS connected to anthropogenic GHG emissions.  What I did find is uncontested research showing natural sea level increases over the past 4000 years.
http://fossil.earthsci.carleton.ca/~tpatters/pubs2/2004/gehrels2004qi120_79-89.pdf

Posted by Ralph Doncaster at 2:23 PM