My primary heat source is a 3-ton water-to-air geothermal heat pump.  It was factory-filled with R-22 (freon).  It was designed for warmer climates, as it had a factory-installed freeze protection switch that shut the unit off when the outgoing water temperature came close to 0C.  I bypassed the freeze switch and used a water and antifreeze (windshield washer fluid) mix for the loop.

The optimal amount of refrigerant in heat pumps (and air conditioners) depends on the temperatures of the cold and hot sides. I wanted to tweak the refrigerant charge, but R-22 is bad for the atmosphere and hard to come by.  I came across some information on propane (r-290) as a refrigerant which indicated it can be used as a substitute for R-22.  I can get it cheap at my local hardware store, and even Greenpeace likes it.

I read about people using propane for DIY computer cooling, and someone that recharged an R-22 system with propane.  The first thing I needed was a manifold gauge set.  They tend to sell for $100-150, but I found what I thought was a good deal on ebay for about $50.  It has plastic handles on the valves, and one was broken on arrival.  About a minute after I hooked it up to the high and low side schrader valves I heard a loud pop.  It took several more minutes to figure out one of the hoses had burst and was leaking.  Now I would HAVE to recharge the heat pump.

I had a gauge set (with 2 of 3 hoses still good), and a couple 16oz canisters of propane.  Fuel-grade propane can have moisture in it which is supposedly bad for a heat pump.  Instead of trying to buy refrigerant-grade propane (r-290), I decided to run the propane through a drier.  I bought a drier with 3/8 copper sweat connections and a shrader valve at Wolseley (about $20 total).  I bought a propane torch and unscrewed the tip.  Here's my parts: 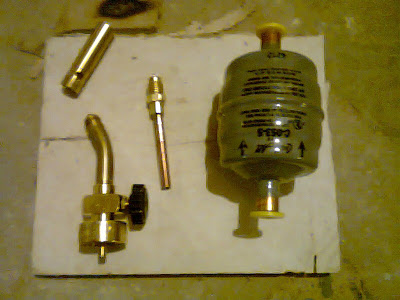 I cut the 1/4" copper tube off the schrader, then soldered it all together: 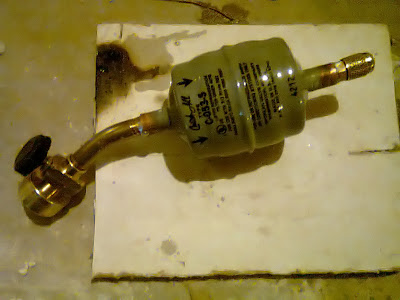 I hooked it up with a propane tank to my gauge set to check the pressure.  The pressure was slow coming up, probably because the pinhole orifice in the propane torch was too small.  I unsoldered the tip, drilled the pinhole out to 1/16", and then tested it to see how much more propane comes out: 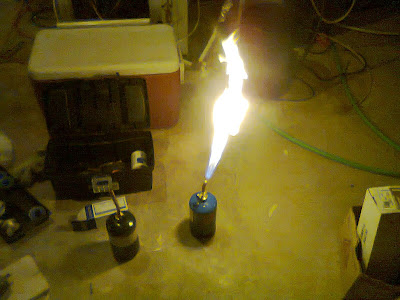 I soldered my rig back together, and then hooked it up to my heat pump and started charging it from the low side.  After a few minutes I turned on the heat pump, and was reading ~30psig on low side and the suction tube temperature about an inch away from the compressor was ~5C.  That was about 20C of superheat - much higher than what it should be for optimal efficiency.  After a few more minutes I had gone through about 400g of propane and my low side pressure was 40psig, with the suction tube temperature around 0C.  The antifreeze mix coming out of the heat pump was -8C; right around the evaporation temperature of propane at 40psig.  I'll do some more performance measurements later; for now the heat pump is working OK.


Posted by Ralph Doncaster at 3:24 PM

Hi Ralph, Propane works pretty well in this case. Flammability is similar to CFC refrigerants if you consider the oil mist that is en-trained in the refrigerant. I did this on older R-12 automotive systems with great success about 10 15 years ago when the whole R-12 to R134 switch was going on. The blend was (if I remember correctly) 78% propane and 22% isobutane (camp stove fuel) and it proved to be more efficient than R-12. The industry called it HFC-12. I never bothered drying the gas with in-line descant canisters (pretty inefficient on a single pass) and just made sure the system had new dryers installed when I did the charge.

I like this hack. Definitely label this if you ever sell the place, or have it professionally serviced (like when you're too old to do it, if this is your "FOREVER" house.)

You are lucky you didn't use a full-size propane tank with an unregulated setup like that torch. At ~325 PSI those brazed connections would have been toast.

This is why brazed connections are frowned up on by NFPA :) Seems like you knew what you were doing and I hope this hack serves you well!

Please be careful, R-290 isn't compatible with all the oils commonly used in refrigeration applications and propane can attack rubber and plastic seals in the system, you could be looking at leaks inside your house, and you don't want propane building up in your home.

Michael, thanks for the comment on the drier. My heat pump didn't have one (probably since it's a self-contained water-to-air unit). I've seen some of the PC overclocking hacks that didn't use a drier, but since it was cheap and I wasn't using refrigerant-grade R290, I used it.

Starbuck, I'm glad you like it. Regarding the pressure from a full-sized propane tank, I haven't double-checked a PT chart, but I'm pretty sure at 20C the pressure is around 150psi. It doesn't matter if it is a little 400g cylinder or a 400-pounder; the pressure inside will be the same for a given temperature.