It's been over two years since I first wrote about mini-split heat pumps.  In that post I explained a bit about how to size a heat pump, and now I'll go into more detail.  Most installers will use rather unscientific rules of thumb, so I suggest doing the calculations to get a more accurate estimate of your heating needs.  Also, the biggest benefit in heating cost stavings comes from installing one system.  When two systems are installed, the second system will rarely provide the same amount of savings as the first.  If the first system saves you $800 per year in heating costs, adding a second might only save you $400 more. 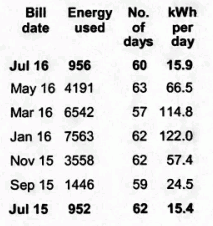 I've shown a power usage report for a house in Nova Scotia with electric resistance heating and no air conditioning.  Other utility companies should provide similar information with their billing.  The report shows that minimum daily use is 15-16kWh per day.  This would be power use from the electric hot water heater, household appliances, and lights.  Subtracting this from the wintertime peak of 122kWh per day gives 106kWh per day of electricity demand related to heating.  Since 1kWh = 3412 BTU, the house requires 106 * 3412 / 24hr = 15070 BTU/hr of heating.  The house will have some upgrades done such as additional attic insulation and air sealing, so the average January heating demand will be less than 15,000 BTU/hr.  The layout of the subject house is reasonably open, so single ductless split with a heating capacity of one ton (12,000 BTU/hr) at -15C will probably be able to provide more than half of the heating requirements.

One-ton mini-splits appear to be the most popular units for residential installs in Nova Scotia, with 1.5 ton the next most popular.  Installed prices for a top brand name (Fujitsu, LG, Mitsubishi) one-ton unit are typically between CAD $3,000 and $4,000 plus sales tax.  For the subject house the installation is rather simple, with a short vertical run for the line set from the outside unit to the inside air handler.  After searching ads on kijiji and asking for referrals, I obtained a quote for CAD $3000 + tax to install a LG LA120HYV system.  It has a maximum heating capacity of 13,720 BTU at -15C and 15,650 BTU at 0C, requiring 1.57kW of power for a COP of 2.92.  This means the cost of one BTU from the heat pump is about one third of the cost of one BTU from an electric resistance heater.  With electricity costs of 15c/kWh in Nova Scotia, I estimate the LA120HYV system will save $1,500 per year.

While installed prices for a top brand heat pump generally start at $3000 and they are usually only sold as installed packages, systems from Chinese manufacturers Gree and Midea can be found for under $1000.  If was buying for my own home where I could install and maintain the system, I'd choose a much cheaper (lower-efficiency) Midea system.  For example, a nominal one-ton Rheem-branded mini-split system manufactured by Midea sells for $799 at my local Home Depot.

I'll note that making technical comparisons of mini-split heat pumps is a very difficult process.  Finding engineering manuals for cheap systems from Midea is almost impossible.  For the high-end brands, despite marketing about their quality and efficiency, many don't publish the engineering data on their web sites to back up those claims.  Between Fujitsu, LG, and Mitsubishi, LG is the only one (as far as I could tell) that makes their engineering manuals readily available on their web site.  For Fujitsu, I had to call their technical support to request an engineering manual for their RLS3 series.  A local Fujitsu dealer I spoke to justified the higher prices of the Fujitsu units by claiming they are more efficient than LG, but he didn't have any numbers to back up the claim.  The specs on the LA120HYV1 show that it is slightly more efficient than the Fujitsu 9RLS3.  The Fujitsu does have a bit higher output than the LG (15.4 vs 13.7k BTU @ 5F), so at 13.7k BTU of output the Fujitsu might  be a bit more efficient.  Given the installed cost of the LG is much less than the Fujitsu, I think the certainly of lower capital costs trumps the possibility of slightly lower operating costs.

If you are doing your own comparisons, take note of the difference between the actual and rated (advertised) capacities.  Industry standards require that a heat pump advertised as a 12,000 BTU model must be able to output at least 12,000 BTU at an outdoor temperature of 47F (8.3C).  System's like Fujitsu's RLS3 series and LG's HYV1 will output much more than their rated capacity, and even output their rated capacity down to -15C or colder.  LG's lower-cost  HSV4 series however only outputs 69% of their rated capacity at -15C.

Addendum - beyond the numbers

Avoid installing too much capacity, such as putting two 1.5 ton systems in a small house (something I have seen in my own neighborhood).  Modern split heat pump systems are variable capacity, meaning they will reduce their heat output before they shut off.  A system that has an output of 16,000 BTU at 0C may reduce it's output to 8,000 BTU before shutting off.  However if it only stays on for 15-20 minutes before turning off, and then turns back on 5 minutes later, it might never enter a defrost cycle.  Depending on how intelligent the controls are, this may not be a problem for some units, but I have heard of this happening with Daikin, Fujitsu, and LG units.

In snowy climates the outdoor units should be sheltered from blowing snow, or raised high off the ground.  When snow blocks the fan blades on the compressor unit, it can blow a fuse on the fan controller board, or fry the control board if it has no fuse.

Posted by Ralph Doncaster at 5:33 PM