Many states and provinces now meter electricity based on time of day, with weekend and night rates near half of the daytime rates.  Besides timers for hot tubs, many other high-use appliances can be timed to run when electricity rates are lower. 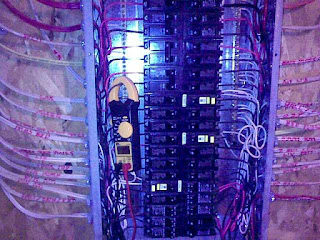 Dishwashers with electronic controls typically have timers, and especially if you use added heat or heated dry the timer is worth using.  Some washers and dryers also have timers, and although most people know an electric dryer uses a lot of power, washers also use a significant amount. Using a clamp-on ammeter, I measured the power of a 240V electric dryer on medium heat setting to be 5600W.  Using Nova Scotia's power rates, running the dryer for an hour would cost 73c, but only 39c during off-peak rates.  The washer uses 750W, so using the washer for an hour during off-peak rates would save about 5c.

Hot water heating is the second largest household energy user in Canada after space heating.  When I first switched to TOD rates I installed an Intermatic EH40 timer on the hot water heater.  One year later it failed.  For a replacement I installed an Aube TI040.  I paid less than $100 at Harris & Roome, which is less than I paid for the EH40.  It also has a 3-year warranty vs. 1-year on the Intermatic.  When installing a water heater timer, it's a good time to check your water heater element; many 40-gallon hot water heaters come with two 3000W elements installed, but can accept up to 4500W elements.  A 4500W element will heat 50% more water in a given amount of time than will a 3000W element.

Cost savings will depend on household hot water use.  A 2008 study by NRCAN, "Hot Water Use Field Test Results" indicates a four-person household uses about 190L of 50C hot water per day.  Assuming a cold water supply temperature of 10C, heating 190L of water uses 8.8kWh of electricity.  At normal rates that is $1.15 vs. 62c at off-peak rates.  With savings of 53c/day, the timer will pay for itself in less than 7 months.
Posted by Ralph Doncaster at 10:06 PM

I see that you refer to the NS Power rates often in your post. Is there any chance that you would know what the different rates (A/B/C) cost that are observed on my house meter. I just had it installed and would love to keep a closer eye of the costs but I'm not sure what rates NS Power associates to the three different A/B/C ratings.

I have the Aube TI04X on a new home construction and it has failed twice. The IR (in rush current) rating is 30amps. The timer is meant for a motor load where IR will be brief while the motor comes to speed. A hot water tank that is cold will draw full rating until the water comes to temperature, this is not IR. Talk to your plumbing or electrical contractors as these are failing everywhere.